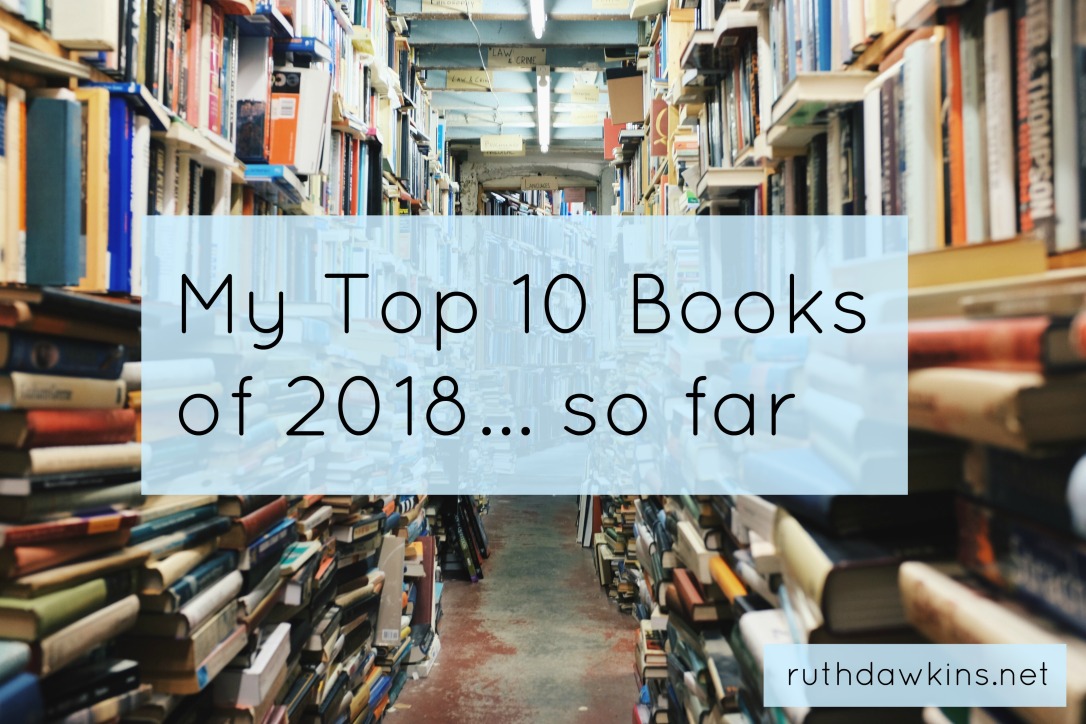 My husband and I were lying in bed reading the other night and I could feel him giving me a sideways glance.

“Is that another new one?” he asked.

He made a face at me.

I can’t understand is why that’s supposed to be a bad thing, can you?!

I read much in the same way that I eat: quickly, and with great delight. But I’m much more choosy about my reading material than I used to be. Whereas I used to wander into a bookstore and choose whatever was included the 3 for 2 offer, now I only let myself buy things from a carefully curated wishlist. Life’s too short for bad books.

So far in 2018 I’ve read 28 books: 18 fiction and 10 non-fiction; 21 by women, 4 by men and 3 anthologies that were a mixture of both. Two of the books were slightly disappointing – not because they were bad, but because they weren’t what I was expecting – but the others have all been fabulous. I thought I would recommend some of my favourites here.

Blimey, this is a beautiful read. It’s a memoir by the writer and photographer Bill Hayes focusing on his time living in New York and his relationship with the late, great Oliver Sacks. It’s written with such tenderness and honesty and weaves snippets of New York life with examples Hayes’s photography and personal memories about Sacks. It’s probably my favourite read of 2018 so far, even though I worked my way through most of a box of tissues towards the end.

2. Under the Udala Trees by Chinelo Okparanta

This is the debut novel by Nigeria writer Chinelo Okparanta, who previously won the Lambda Literary Award for her short story collection Happiness, Like Water. The novel follows the loving relationship between two young women – Ijeoma, a Christian Igbo and Amina, a Muslim Hausa – in the 1970s. It is beautiful and heartbreaking in equal measure.

This was a Christmas present from a dear friend who knows me well! It was published last year after a crowdfunder by independent Scottish publisher 404 Ink. It’s an excellent and hugely relevant collection of essays and interviews by young women, covering the political, the personal, and the intersection of the two.

4. Everything I Never Told You and Little Fires Everywhere by Celeste Ng

I couldn’t choose which Celeste Ng book to include, so I’m cheating and including both. I LOVED these books. Ng is an astonishingly talented writer. Within the first few pages of each novel she manages to create complex, interesting characters that you care deeply about as a reader, then she goes on to build and sustain an uncomfortable tension until the final paragraphs. Gosh, do I admire her skills.

Sarah Menkedick is the founder of Vela, one of my very favourite sites for beautiful essays about women, travel and motherhood. Homing Instincts is Sarah’s own essay collection on similar themes. It’s a book that gets better and better the further into it you get, exploring questions around what it means to be a mother and how you know when you’ve found home.

6. The Last Man in Europe by Dennis Glover

I borrowed this book from a colleague of my husband’s and enjoyed it so much more than I’d anticipated. It’s a fictionalised account of the life of George Orwell in the years before and during his writing of 1984. It’s very accessible writing, a great portrait of Orwell and definitely added to my love and understanding of 1984 itself.

This was an absolutely captivating story by the wonderful indigenous writer Anita Heiss. It’s about an Aboriginal family offering refuge to an escaped Japanese POW and the relationship that develops between the POW and the young daughter in the family. It’s another one you’ll need a box of tissues to get through! (On a side note, I am super excited about getting a copy of the recently-released anthology Growing Up Aboriginal in Australia, which was edited by Anita Heiss. The reviews so far have been great.)

8. Welcome to Lagos by Chibundu Onuzo

What a rip-roaring story this was! The five main characters are a military officer, a private, a housewife, a militant and a young girl, and this funny, hugely entertaining book follows their life as they arrive in Lagos for a new start. Written in beautiful, colourful detail, this second novel by Chibundu Onuzo put a huge smile on my face.

I lusted after this Ashley Hay novel for months before I bought it, mainly on the basis of the stunning cover design. Thankfully the words within didn’t disappoint. Detailing the intertwined lives of two women from different generations – occupants of the same house in Brisbane at different times – it’s sad in parts but a genuinely lovely read. (Without dropping any spoilers, I particularly enjoyed it when one of the characters took an impromptu visit to Hobart!)

10. The Sisters Song by Louise Allan

Set in Tasmania over seventy years, starting in the 1920s, this novel follows two sisters on separate but entwined paths. It’s about all the things that interest me: family, relationships, love, music, and finding your place in the world. Writer Louise Allan currently lives in Perth but she’s Tassie-born and I believe is popping down here for an author event later in the year, so keep an eye on her Facebook page for all the details.

11. Bonus Book! Before I finish, I want to include a bonus number 11: Stories For Boys Who Dare to Be Different by Ben Brooks. (This falls into the category of ‘books I buy for my son on the condition that I can read them first’. See also: Goodnight Stories for Rebel Girls, everything by Oliver Jeffers, and Usborne’s Politics for Beginners…).

Stories for Boys makes a wonderful companion piece to the Rebel Girls books. It’s very similar in style with an illustration and a single page of text on each person featured. They include Nelson Mandela, Louis Armstrong, Benjamin Zephaniah, Daniel Radcliffe and a heap of other men and boys who have succeeded in their chosen field.

I’ll try and do one of these posts every few months, but if you want to keep track of what I’m reading on a regular basis come and say hello over on my Instagram account RuthReadsBooks.

I’d love to hear your own recommendations too! Please feel free to leave me a comment below.

Photo by Glen Noble on Unsplash

I acknowledge the Tasmanian Aboriginal People as the Traditional Owners and ongoing custodians of lutruwita, Tasmania. I pay respect to all Aboriginal and Torres Strait Islander peoples and to their Elders past, present and emerging.